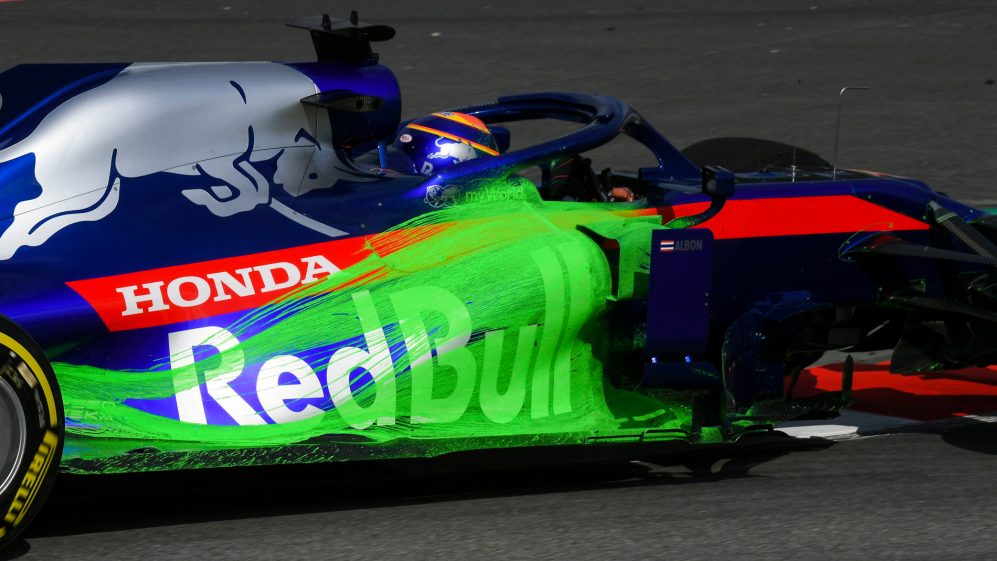 Good evening EUROAVIAns,
in today Fact Friday we will ask you a question: have you ever wondered what is the green paint that can be seen on a Formula1 car?

It’s the “flow-viz”, slang for “Flow-visualization” and it’s a special fluorescent powder that gets mixed up with a light oil, usually paraffin. This liquid is used for aerodynamics testing during practice sessions: engineers liberally paint the car and the specific component of interest (e.g. front wing) with this liquid in order to track the air flux and its interactions with the aerodynamics surfaces.

The really high speeds reached by Formula1 cars will allow the Flow-viz to run and dry as the light oil evaporates. Once the car returns to the garage, the engineers carefully study the tracks of the airflows painted on the surfaces of the car, verifying that the air behaves as expected from the CFD (computer simulation) and wind tunnel data. Intense bands of paint will indicate areas in which the air speed is higher, whereas light colored bands will imply a lower speed of the fluid.

Fun fact: The Turkish GP held from the 13th to the 15th of November 2020 was filled with unique challenges, but the weekend offered a fascinating glimpse of teams’ aero secrets as well! Indeed, the bad weather allowed photographers to capture images of some of the vortices, and the wet surface gave clues about how the aerodynamics of the car disturb the airflow and manipulate the tyre wake to improve performance.

In addition to this, the track surface was still leeching oil residue, which emulsified when mixed with the rain and, after nearly two hours of running on Sunday, left the cars covered in a grey hue. This substance behaved much like the Flow-viz paint, offering the chance to see a car’s aero secrets at work.